Last week while I was out checking our sap collection buckets at Ryerson Conservation Area, everything in the woods seemed a bleak brown and gray. It didn’t look much like spring was on our doorstep, but it sure sounded like it with the “plink plink” of sap dripping into aluminum buckets on the sugar maple trees and the slow “peep peep” of cold, little spring peeper frogs. Then, a male eastern bluebird landed on the branch above my head. He was a vivid blue exclamation point that seemed to shout, “Spring has arrived!”

These small, cerulean gems are migratory and typically spend winters in the southern United States and Mexico. Although, it is not uncommon to see them stick around in the north during mild winters when food is available. In fact, some of our environmental educators did see one in the area this January.

Eastern bluebirds belong to the bird family of thrushes, which includes American robin and wood thrush. Each of these species are commonly associated with the start of spring in Lake County, Illinois.

Eastern bluebirds feast on berries, seeds and insects in open woodlands, meadows, orchards and farmland edges. They have interesting foraging methods and can be seen hovering to catch insects, as well as “ground-sallying,” where they fly from a perch, settle briefly on the ground to capture an insect and return to the perch. Bluebirds also play an important ecological role in dispersing seeds. 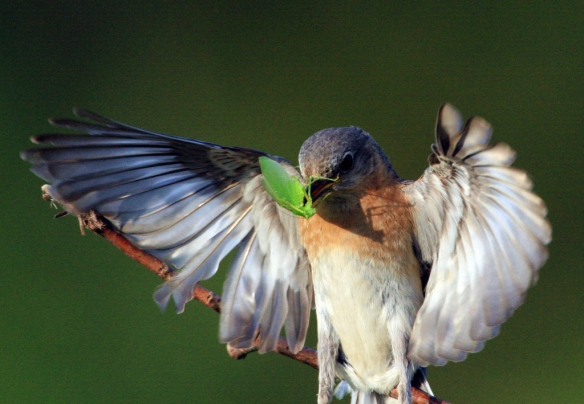 The soft, warbled song of eastern bluebirds signals the start of the mating season. Males are the showman, wearing a flashy blue “sport coat” complete with “tails” and a blush of orange on the breast. Males have been known to guard their mates (more muted in color) from other males by chasing them at top speeds, grabbing feathers, and clashing wings with the competing suitors. Once paired, eastern bluebirds are generally monogamous. However, recent studies suggest one in every four to five eggs involves a parent from outside the pair.

Eastern bluebirds nest in tree cavities that form naturally or were previously excavated by woodpeckers. Once a cavity or nest box has been claimed by a male bluebird, it will stand nearby (or on top of the box) and wave its wings in a perched position to attract a female. He will also try to entice her by bringing nesting materials of fine grasses and pine needles to their “fixer upper.” His handyman skills end there, and soon the female takes over, builds the nest and incubates the eggs. Nest construction and egg laying take about one week to complete. Incubation lasts about two weeks. Around 20 days after hatching, the fledglings are ready to “fly the coop.” Eastern bluebird pairs typically raise two broods each summer. 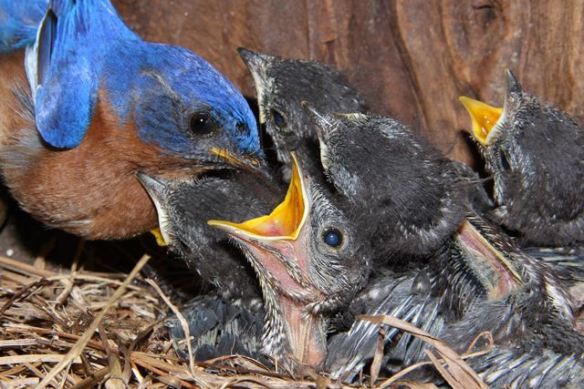 Bluebird populations declined in the early 20th century due to a rise in numbers of non-native bird species, such as house sparrows and European starlings. These bully birds aggressively seize bluebird cavity nests, destroy eggs, and kill nestlings and adult bluebirds. Conservation agencies and bird lovers responded by establishing bluebird monitoring trails and nest box campaigns. Nest boxes mimic natural tree cavities and have been a huge success with one study reporting that eastern bluebird populations steadily increased 2% each year from 1966 to 2010. If you have the right type of yard, you can help, too. It is fairly simple to make a bluebird nest box at home.

Here at the Lake County Forest Preserves we have a dedicated crew of bluebird monitors that hike 22 bluebird routes within the preserves, keeping track of how each one of the 300 nest boxes is fairing. Last summer, 224 bluebirds successfully fledged thanks to the watchful eyes of these volunteers. If you want to join the fun, they are always looking for more folks to join their monitoring crew.

Interested in watching these birds in action and learning more about our local bluebirds? Join us this spring for a Bluebird Hike at Ryerson Conservation Area, where 50 bluebirds fledged last year!