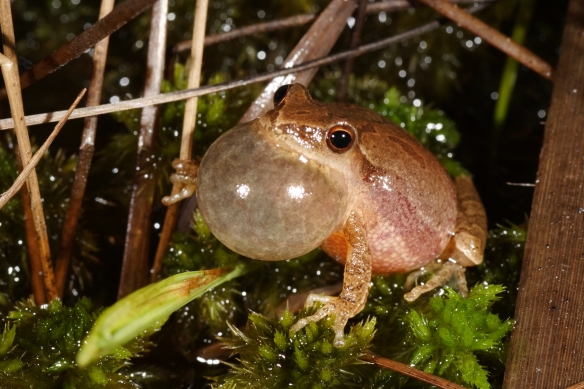 My young sons and I recently read a library book together about the names of animal groups. I was struck by how many of the group names match the animals’ behavior or movement: a parliament of owls, a flutter of butterflies, a walk of snails. The boys and I agreed our favorite group name was an army of frogs.

Here in Lake County, the first army of frogs has already hopped its way from woodlands and fields, where they spent the winter, to the neighboring ponds and wetlands. You know they have returned each spring when you hear the trilling “creeeee” of the western chorus frog (Pseudacris triseriata) and the “peep-peep-peep” of the spring peeper (Pseudacris crucifer)—two of earliest frog breeders in Lake County. A single chorus frog’s call is similar to a fingernail running down the teeth of a comb. An individual spring peeper calls out its name, while a full peeper chorus sounds like ringing sleigh bells. To hear other amphibious recordings visit the Chicago Wilderness Habitat Project Calling Frog Survey or the Cleveland Museum of Natural History’s index of frog calls.

Three main factors influence frog and toad breeding periods: daily rainfall, temperature (soil, air, and water), and photoperiod. With the unusually warm spring this year, these frogs have been on the fast track, much like wildflowers throughout Lake County. In fact, on a few of those 80-degree days even American toads (Bufo americanus) were heard trilling, which doesn’t typically occur until mid-April at the earliest.

Early in the breeding season, chorus frog calls can be heard on clear, sunny days much like those we have experienced over the past few weeks. These choruses shift to evenings or cloudy, rainy days as the season progresses.

What is all the ruckus about?  Well, finding the ladies, of course. 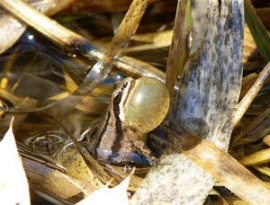 Female frogs choose a single mate out of an entire pond of suitors. Their choice is based partly on these vocalizations. There is also physical competition by the males, who scientists have observed biting, pushing and wrestling to prove their worth.

Each song is an effort to resonate with one special lady. Standing silently near a wetland, I love to imagine how these tiny guys look as they take a deep breath, close off their nostrils and inflate their vocal sac to make each call. Scientists have noted that these vocalizations are a very energy expensive behavior. But it all pays off when two frogs embrace (called amplexus) and the male fertilizes eggs as the female lays them. Chorus frog eggs are laid in clusters of 20-75 attached to sticks or in free-floating masses. The male and female stay together as she moves around from one spot to the next laying these clusters. By the end of the mating session, anywhere from 500-1500 fertilized eggs have been laid!

I have spent many nights in the middle of a wooded wetland, working as a frog monitor. Monitoring protocol requires standing silent for at least three minutes before you begin the count. Slowly, the surrounding army adjusts to your presence and picks up the pace again. There is nothing like being in the center of the pond as frog calls reverberate in your ribcage much like I’d imagine the encompassing sound of an army marching to battle.

Read our guide to Lake County’s frogs for other armies heading to the wetlands soon.

1 thought on “Army of frogs”