It was a windy, but bright, April 1 this year. I was on a trail at Ryerson Woods with a group of volunteers. Most of our heads were focused downward, inspecting the minutiae of a bloodroot bloom. Then, someone shouted, “EAGLES!” I truly thought the next thing shouted would be “APRIL FOOLS’!” but when we snapped our heads skyward, we saw two ivory-headed eagles swooping back and forth above the trees. No joke!

It is common in Lake County, Illinois to see a bald eagle (Haliaeetus leucocephalus) here and there. Numbers of wintering bald eagles in the Illinois have been on the rise. During winter, migrating eagles hunt for fish in the unfrozen waters of Lake Michigan and the Des Plaines and Fox rivers. As of 2014, Illinois was second only to Alaska in populations of these majestic birds between December and March. During these months, the highest concentrations of bald eagles are found near locks and dams along the Mississippi and Illinois rivers, such as those that migrate to Starved Rock State Park each year.

The lower the thermometer dips in areas north of Illinois, the higher your chances become to see eagles in Lake County as they fly further south in search of open water. While these rising numbers are encouraging, Joe Kath, Endangered Species Manager with the Illinois Department of Natural Resources says, “When it comes to recovery, it’s based on numbers of breeding pairs.”  It’s only in recent years that bald eagles have begun nesting again in Lake County, which is one big reason why our sighting last month was so special. 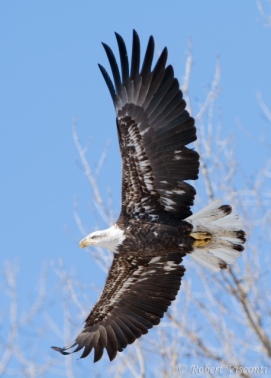 Seeing a bald eagle in the wild for the first time can knock the wind out of you. It’s then clear why people rally around this American symbol and the related conservation success story. Habitat loss and pesticide use brought our designated national bird near extinction in the 1960s. By 1978, the bald eagle was listed as endangered in most states. Public conservation efforts included banning the use of DDT (dichloro-diphenyl-trichloroethane). The pesticide was associated with poisoning fish that the eagles were eating, resulting in thinner eggshells that caused the eggs to break during incubation. The DDT ban, along with widespread habitat protection, allowed bald eagles to flourish rather than flounder. In 2007, bald eagles were removed from the endangered species list, although they are still protected under federal law.

In 2012, a pair of eagles occupied the penthouse “apartment” along the Fox River in Lake County, Illinois. The eagle nest was located amidst an active heron rookery—a crowded conglomeration of 75+ nests filled with noisy neighbors, such as great blue 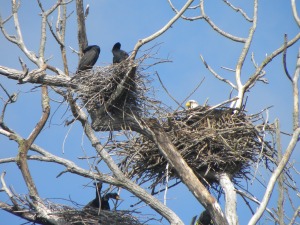 herons, double-crested cormorants and great egrets. Hovering in a sturdy dead tree high above the water, this was one of only five active eagle nests in the Chicago region at the time (and one of two in Lake County). This same eagle pair has returned to their condo along the Fox River ever since, successfully fledging one or two eaglets each summer. 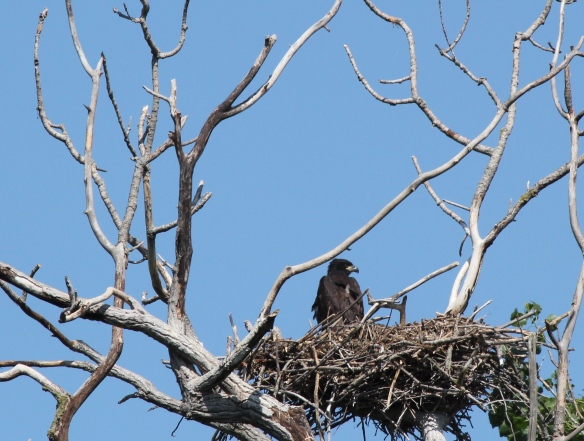 Lake County has a number of ecological qualities that may attract nesting bald eagles: shelter along open waters, large waterways with plentiful food, and numerous mature trees sturdy enough to hold a gargantuan nest 10 feet in diameter and weighing 1,000 pounds. The Des Plaines River Trail and Greenway protects land along more than 85 percent of the Des Plaines River in Lake County. After 54 years in the making, the last section will be completed soon, creating a 31-mile continuous trail—a happy home for the pair of “April Fools'” bald eagles. Search the sky along the rivers for a glimpse of these awe-inspiring birds, or join us on an upcoming free bird walk that highlights the millions of birds that migrate through our region each spring.