This year marks the 100th anniversary of the Migratory Bird Treaty Act, a landmark law that protects bird species worldwide. To honor and celebrate this milestone, organizations and citizens have teamed up to designate 2018 the “Year of the Bird.” We at the Lake County Forest Preserves in Lake County, Illinois are celebrating another bird-related milestone this year as our education red-tailed hawk (Buteo jamaicensis) turns 30 years old. Found as an injured, immature bird in 1988 and deemed not releasable to the wild due to a damaged wing, she has spent almost her entire life as an educational ambassador for the Lake County Forest Preserves. During her tenure, she has encountered about 76,000 people through special events and school programs at the forest preserves, teaching them first-hand about Lake County birds of prey. Across three decades, a behind-the-scenes network of more than 70 employees and volunteers has cared for and learned from this majestic raptor. A handful of staff members still at the Lake County Forest Preserves has worked with her from the beginning. 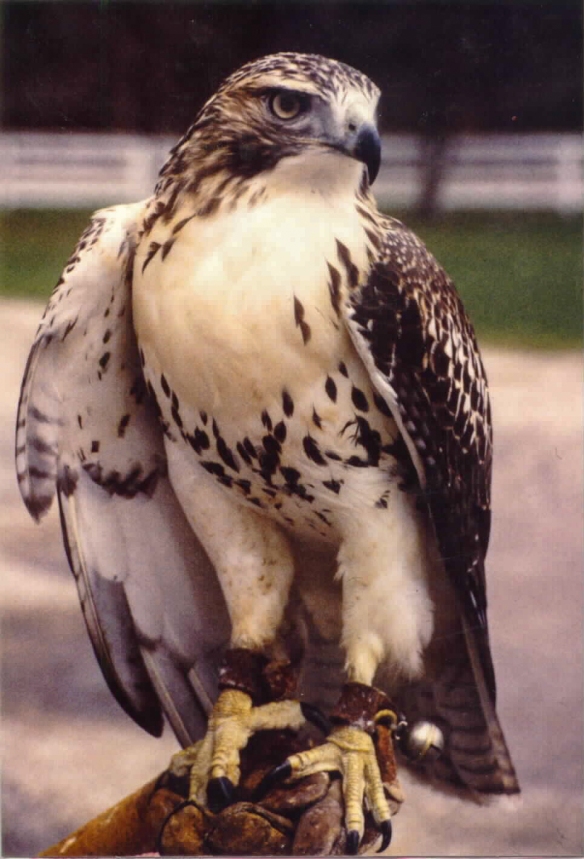 Lately, we have all been reminiscing, sharing stories of what it’s been like to have the privilege of such intimate access for all these years to the life of the hawk.

There’s a lot to do when you’re caring for a wild hawk. It comes with challenges and rewards. She’s fed her daily rat or quail while perched on our arm atop a thick leather glove. We’ve all learned she can be picky about which parts of her meal she eats (skin and muscle) and which parts (intestines) she flings on your shirt. But watching from inches away as her instincts take over and she uses her razor-like beak to precisely dismantle her prey is a thing of grotesque beauty.

Her hooked beak and dagger-like talons need to be honed so they don’t grow too long, impeding her eating or movement. In the wild, her beak and talons would be naturally filed down as she landed and perched on a variety of surfaces, but due to her limited movement she needs a little help. The hardest part isn’t the trimming itself, but safely wrapping her in a towel and covering her eyes so she remains calm during the process. She knows when it’s trimming time and tends to bate (fly off the glove) and vocalize a ton. Yet, once swaddled securely, she becomes docile. The hum of the Dremel often even lulls her to sleep. Feeling the feathered weight of a sleeping hawk on your lap is an embodiment of the quiet grace often overlooked in this predatory raptor.

In front of an audience, this large bird of prey commands the room, hushing the crowd and demanding respect by her presence alone. Folks are usually surprised when we tell them she only weighs about as much as a half-gallon of milk. It doesn’t sound like much, but it sure feels like it when you’re holding her on an outstretched arm for long periods of time. The pain fades, though, as you see the awestruck faces of the group when the hawk stretches to reveal her full wingspan or coughs up a pellet in front of them.

Through the seasons, we have heard her scream to the migrating hawks flying overhead in the fall and found remains of wild rodents that sought shelter in her mews over the winter, unaware of their impending fate. We have watched her meticulously build a nest and tiptoe her talons around her eggs with care in the spring. We have felt the spray of water as she bathed and preened in her dish on a hot summer day.

These intimate moments through the years that staff and volunteers have been privy to with our red-tailed hawk help remind us that at the end of the day, she is truly wild. 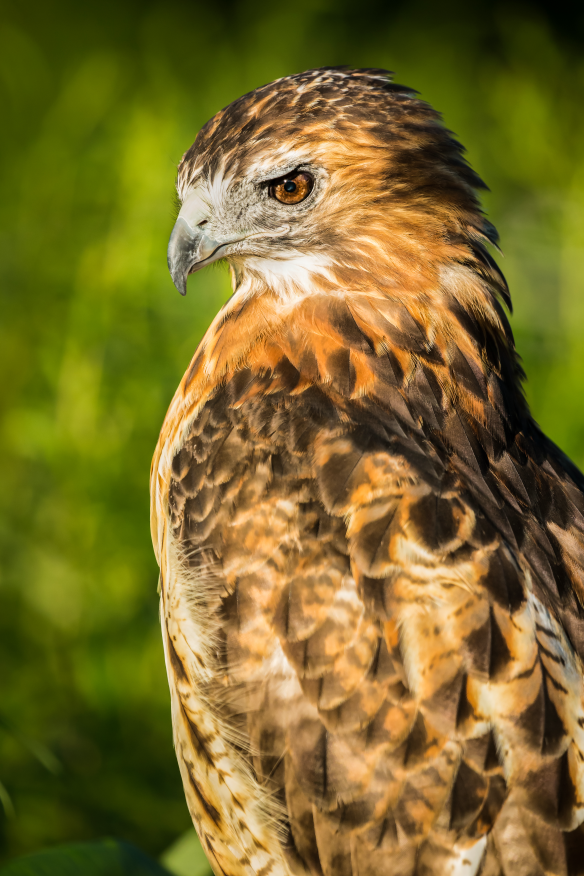 We invite you to share in the joy of her wildness as we celebrate her 30th birthday with a free drop-in program at Ryerson Welcome Center on Sunday, September 23, 12–3 pm. Meet the hawk and our education eastern screech owl. Learn about raptors with hands-on education activities, then make a birthday card for the hawk. Drop in any time starting at 12 pm. No registration required. All ages.

2 thoughts on “Happy birthday to our hawk”