This winter has been harsh in Lake County, Illinois, causing many of us to wish we could migrate to South America like some birds do, or hibernate in a cozy underground den like the groundhog.  Alas, most of us just stick it out in the cold. It may offer consolation to know we are not the only animals active during these record-breaking cold, snowy days. It turns out there is a whole ecosystem teeming with life right under the snow. 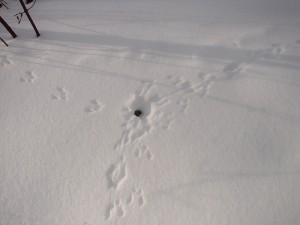 Recently, scientists having been taking a closer look at life in the subnivean, which literally translates to “a place under the snow.” The space between the snow and the ground acts as a seasonal refuge for invertebrates, birds, and small mammals. Snow affords these small critters with remarkable insulation, and temperatures around 32 F regardless of the temperature above the snow. Biologist Bernd Heinrich explains the science underlying these insulating properties in the book Winter World: The Ingenuity of Animal Survival. “As long as both ice and water exist side by side, they constitute a thermostat keeping temperatures constant.” When water converts to ice crystals, heat releases. When ice turns into water, the process uses up heat.

vole (Microtus pennsylvanicus), a small rodent with tiny ears and a short tail. Meadow voles stay active both day and night, year-round. While inside their snow runways, these herbivores feed on grass stems, rootstocks, seeds and bark from the base of trees. When these active dynamos do need a rest, they build communal grass nests that get as toasty as 50 F. This coziness contributes to booms in vole populations even when the temperatures are plummeting and snow remains plentiful. Scientists studying light-transmitting properties of snowpack have found that when they mimicked spring’s melting and refreezing cycles, the snow became more ice-like and transparent, allowing additional light to reach the under-snow tunnels. These light cues, coupled with the warm temperatures in the nests and tunnels, explain how voles get a jump on spring and reproduce rapidly up to 2-3 months before the snow melts.

Winter-active predators literally hear these vole populations. Fox and coyote locate the critters by sound and then pounce, crashing their front paws through the snow to collapse the tunnels and trap their prey. Owls are in the game as well. Meadow voles comprise about 95 percent of the winter diet for owls in the Eastern part of the U.S.

While the temperatures are not forecasted to rise above freezing for the next few days, the sun is out longer and stronger each day. Although it often doesn’t feel like it, spring is around the corner and soon the subnivean zone will be a distant memory. Here at the Lake County Forest Preserves we are welcoming spring with our annual Maple Syrup Hikes, held the first three weekends in March. Come out and join us or check the latest edition of the Forest Preserves’ “Horizons” publication for other ways to think spring.

6 thoughts on “Surviving in the subnivean”