Now that the icy days of January have arrived, everyone in my house has that cooped up feeling and needs to get outside for a view of the expansive winter sky. We need to breathe a bit of fresh air, regardless of how cold it might be. At dusk, my sons and I have been hiking a nearby trail that takes us through scrubby meadows and thickets. During these forays, the boys are often loud and boisterous—until they flush out a cottontail rabbit. They quickly hush. We spend the rest of the hike searching for “our” rabbit (or signs of it) as we crisscross the worn network of trails trodden with tracks. 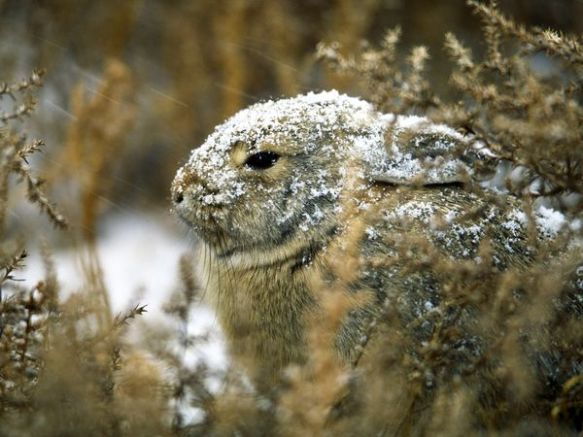 Because eastern cottontails (Sylvilagus floridanus) are commonly seen in Lake County, Illinois, it may be assumed that we know them well. Considered cute and cuddly by most people, cottontails actually have some surprisingly odd characteristics and unique behaviors. For example, one factor that leads to the high visibility of cottontails is their high reproductive rate. Research shows that if no mortality occurs, one pair of rabbits could produce a staggering five million offspring in five years! In reality, however, it is estimated that 85% of the cottontail population dies each year due to weather, disease, predation and social behaviors. Yes, their social life can literally kill them. When local densities are excessively high, frequent social interactions increase stress in these animals, causing smaller litters and lower success rates.

Cottontails are primarily crepuscular animals, which means they are most active at dawn and dusk; though they do have some nocturnal feeding habits. They spend snowy winter months snipping buds and twigs (at a precise 45-degree angle) off small trees and shrubs for sustenance. Saplings browsed by rabbits will eventually acquire a top-heavy appearance with stunted branches. Small, flattened spheres of scat (feces) can be seen throughout their feeding areas, making it easy to see where rabbits have feasted. Cottontails have adapted to this meager winter fare. In order to absorb more nutrients from their food, rabbits will eat their own scat as it is expelled. Cottontails have a very simple digestive system that makes it difficult to fully break down the woody fiber in their winter diet; thus, important vitamins remain in the scat.

During daylight hours, a cottontail returns to its home “form” along an intricate and familiar highway of trails that covers its home range of about 5 acres. North American rabbits do not live permanently in underground dens like their cousins in Europe. Though the eastern cottontail is capable of digging a burrow, it does not. Rather, it creates a well-hidden “form,” or shallow depression, about five inches wide and seven inches long beneath a grass clump or in a thicket. It is here that a cottontail sleeps the day away, camouflaged among the tall tufts of grasses. If discovered by a predator, most commonly a fox or coyote, the rabbit it will speed away (up to 18 mph) along its network of trails. Often, a rabbit’s familiarity with its secret system of paths will give it an advantage over the predator in pursuit.

My boys and I regularly return to the familiar meadow path where we first flushed the cottontail. Now, they approach the rabbit’s form silently, crouched low on all fours, trying to see how close they can get before the bundle of fur erupts. When it finally flees, the cottontail’s namesake fluffy white posterior is all we see heading away from us through the twilight. This winter, find your own path in one of the Lake County Forest Preserves and visit it regularly to find these critters. While most of our preserves close at sunset, two Solar Lighted Trails stay open after sunset until 9 pm. Additionally, we welcome you to join one of our naturalists for our Families Exploring—Winter Ecology program. Join us and see if you can spot an eastern cottontail and other crepuscular critters at dusk.

8 thoughts on “The winter world of cottontails”