In my early twenties, I believed adventure was found in the tallest mountain, the deepest ocean, the largest cavern. I chased whales, orca, brown bears, bald eagles, and other charismatic megafauna. It took decades to realize I didn’t need to seek these animals or climb these mountains to find adventure. Some of the best adventure awaited me in my own backyard. This led me to join the Education Department at the Lake County Forest Preserves in northern Illinois in October 2018. What an adventure it’s been!

Anyone who’s attended a program taught by our staff or volunteers knows these educators are knowledgeable and passionate. This group ignited my latest adventure—birding—though I can’t point to a single component that sparked my newest hobby. It could have been my awe for the birders in this group, their love for birds and their impressive ability to bird by ear. It might have been my draw to a new challenge. The patience, attention to detail, and dedication it takes to be an effective birder. It may have been the rush of excitement, getting a glimpse of a rare species for a brief moment as it makes its annual migration. Perhaps all of these were feathery factors. Regardless, I’m hooked.

On May 4, I participated in the Spring Bird Count at Ryerson Woods in Riverwoods, where I entered the complex, intimidating world of spring warblers. These birds are small, dynamic insect-eaters that look very similar to each other in the eyes of a novice birder. They pass through Lake County in April and May as they migrate from the southern U.S., Mexico, and Central and South America toward Canada and the northeastern U.S.

Warblers can be hard to spot; they’re small, they move a lot, and males and females of the same species can have different plumage. Prior to this effort, each time I opened my Peterson Field Guide I would skip the warbler section. Despite the challenge, warblers are the most thrilling birds to see. They bring a burst of color, a promise of spring. Their flashes of orange, yellow, and blue make any woodland seem more alive.

The palm warbler is easily spotted by its near-constant tail pumping. And you can look for the yellow-rumped warbler’s, well, yellow rump patch, as well as white patches in its tail.

The black-throated green warbler is often heard before it’s seen. I quickly learned to pick out one of its calls: zee, zee, zo zo zee. It can be identified by its white wing bars and straight, thick bill. They’re found in all different types of forest habitats, even swamps, where they feed on insects, mainly non-fuzzy caterpillars.

Soon I was confident with these species and ready to identify more. My next goal was the black-and-white warbler (Mniotilta varia). Named for its black-and-white stripes, it was fairly simple to identify. This species often hangs out on tree trunks looking for insects in the bark. 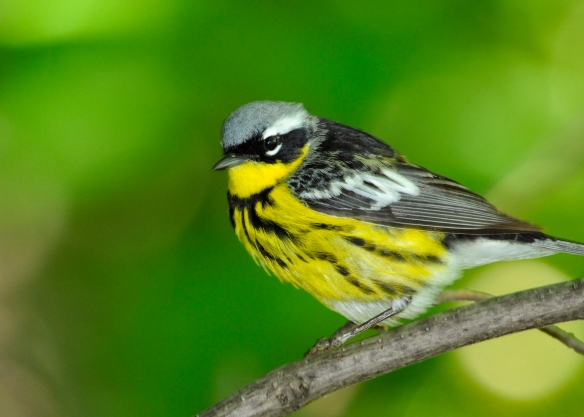 There are plenty more warblers, plenty more birds, to learn about and identify and appreciate. As I continue to grow my annual list and become more familiar with birding areas in Lake County, I encourage you to do the same. Before you travel far and wide, consider engaging with the nature around you. Look no further than your backyard for your next adventure. A world of warblers is out there.

Join us as we close out the spring birding season with our final Birdwatching Hot Spots programs on Saturday, June 1 and Saturday, June 15, 8–10 am at Spring Bluff in Winthrop Harbor. Look for waterfowl and other migratory species. Spotting scopes and binoculars will be available. FREE. No registration required. All ages welcome.

2 thoughts on “A world of warblers”