Discovery is often about being in the right place at the right time. This is exactly what happened recently when a wildlife biologist for the Lake County Forest Preserves was in the right woodland on the right spring day. While monitoring wildlife, a biologist heard sounds from the elusive wood frog (Rana sylvatica). The duck-like breeding calls made by male wood frogs had not been heard in Lake County, Illinois since the late 1980s. This discovery is the first sign of victory following extensive habitat restoration and recent species reintroduction efforts.

Wood frogs are found further north than any other North American reptile or amphibian species. They are the only frog found north of the Arctic Circle. How do they do it? Wood frogs can survive in the coldest climates by increasing the amounts of glucose that pumps through their bodies. The high glucose levels acts as antifreeze, allowing them to survive freezing temperatures 23 degrees Fahrenheit and lower, while they hibernate under leaves on the forest floor. While up to 65% of the water in a wood frog’s body may freeze, they thaw out each spring unharmed and head to the breeding pools.

These amphibians are also one of Lake County’s earliest breeders; whole populations typically appear en masse at ephemeral ponds when ice still clings to the edges. Mating and egg laying occurs in these temporary pools in the forest that fill with melting snow and spring rains. Wood frogs have a very short and explosive breeding season, lasting a single week with males sometimes only calling for a few days.

Male wood frogs float on the water’s surface, calling every so often and attempting to clasp onto anything that drifts by—be it debris, other species of frogs, or even other male wood frogs. Once a female wood frog swims by and the male clasps on successfully, the pair will stay “hitched” for anywhere from an hour to three days. In the breeding frenzy, biologists have witnessed anywhere from five to 10 males clasping to a single female at one time. The female propels the pair through the water as she searches for an ideal, communal egg-laying site. She then lays up to 1,000 eggs tightly packed in round masses about the size of a tennis ball.

These eggs are in a race against time. The tadpoles within must develop, hatch, find food, grow, avoid predators, and morph into frogs all before summer arrives and these temporary ponds disappear. Wood frogs in Lake County, Illinois have faced other challenges apart from their basic biology. Habitat loss, busy roads, invasive plant species, drain tiles, and a gradual shift from oak-hickory woodlands to maple forests have all contributed to the disappearance of this amphibious indicator species. 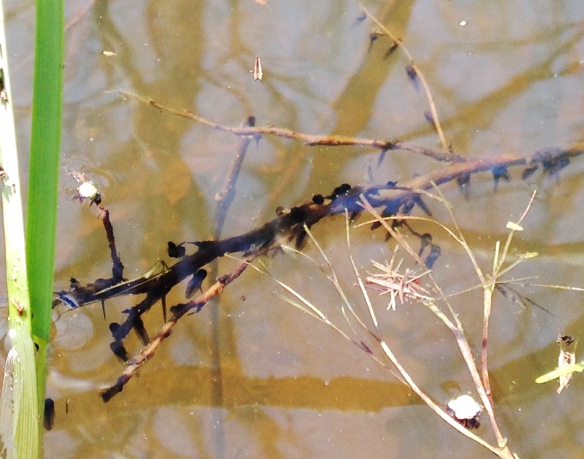 After ecologists removed drain tiles and cleared invasive woody species in a high quality Lake County Forest Preserve, it was time to bring wood frogs back on the scene. During the years 2008 to 2010, thousands of wood frog eggs were placed into ponds in those restored preserves, and the waiting began. This April, that wait ended with wood frog calls and the discovery of 50 wood frog egg masses, signifying the potential for more to come.

While the calls of the wood frogs have faded for this year, there are other spring critters just getting started. Come join a naturalist during the day at a Sounds of Spring hike or after hours for a Spring Sounds Night Walk.