One hallmark of a good camping trip in my family is an evening spent huddled around a crackling campfire as the sun and moon exchange places and dusk settles around us. The smell of the fire, the taste of gooey marshmallows smashed into S’mores, the silhouettes of bats and moths in their nightly chase—all create a moment completed only by the haunting calls of whip-poor-wills (Antrostomus vociferus). These elusive nocturnal birds, although rarely seen, announce themselves boldly by calling their own name over and over again in a seemingly endless serenade. 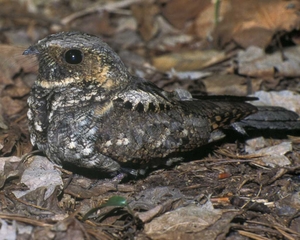 The eastern whip-poor-will is part of the Caprimulgidae family of nocturnal birds commonly called nighthawks and nightjars. Robin-sized and cloaked in impressive camouflage, whip-poor-wills breed in open woodlands and nest on the ground. Their nest is a shallow area among the leaf litter that is carved out by the weight of the incubating parent and two eggs. Whip-poor-wills have been known to lay their eggs in phase with the lunar cycle, so that the chicks hatch about 10 days before a full moon. Thus, the parents can take advantage of the longer and brighter light of a waxing moon to forage an abundance of flying insects when the chicks are at their hungriest. 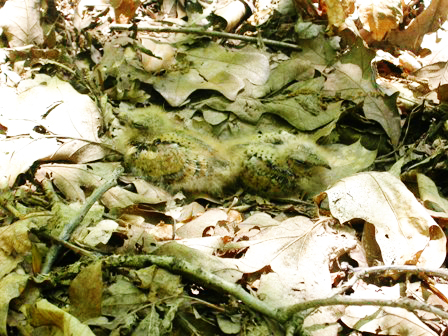 Whip-poor-wills may hunt moths, beetles and fireflies by locating their silhouette against the sky, using a specialized reflective structure behind the retina that is adapted to low light conditions. The feast begins 30 minutes after sunset. The whips hunt by perching in trees or on the ground, making short jaunts 15 feet upwards to nab bugs with a wide gaping mouth surrounded by whiskery rictal bristles that form a basket-like trap. Their large mouths allow passage for insects up to two inches long. Once darkness pervades the night these enigmatic birds will rest for a while, resuming at first light of dawn for another short feeding frenzy before the sun rises fully. During a full moon, whip-poor-wills have been known to pull an all-nighter, stuffing as many as 2,000 small insects into their gullets. 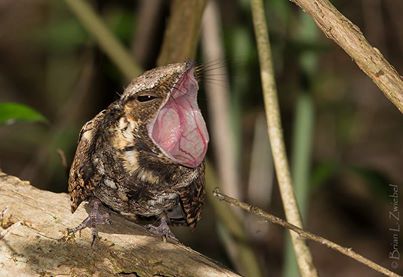 Although eastern whip-poor-will numbers are declining in Illinois, they do still nest in Lake County. Scientists hypothesize the population plummet is due to a number of factors, including loss of habitat, invasive species, agricultural pesticides that have lead to a decline in food sources, and predation by outdoor cats and dogs. Another challenge with this cryptic bird is the fact that traditional bird counts often aren’t able to accurately keep tabs on their populations. The Nightjar Survey Network has stepped in to fill that knowledge gap, using volunteers to collect data about whip-poor-wills and related species.

As summer pushes on, the calls of the whip-poor-wills begin to fade, as do the opportunities to sit around a campfire. Join us for an upcoming Community Campfire Friday Night and listen for the music created by the night.