It comes as no surprise that in a place named “Lake County” you are never more than a stone’s throw away from water. Lake County, Illinois is scattered with thousands of acres of wetlands, dotted with over 170 lakes and rivers, crisscrossed with 400 miles of streams, and bordered by massive Lake Michigan. This year at the Lake County Forest Preserves, we are celebrating this wealth of water by exploring how Water Connects Lake County through educational programs and recreational opportunities.

One way water connects the critters of Lake County is through the magic of metamorphosis. Ponds, streams and other wetlands host and hide well-known animals in surprising forms. Take a look at the picture below. This is a type of insect found in most local bodies of water. Can you identify this creature? 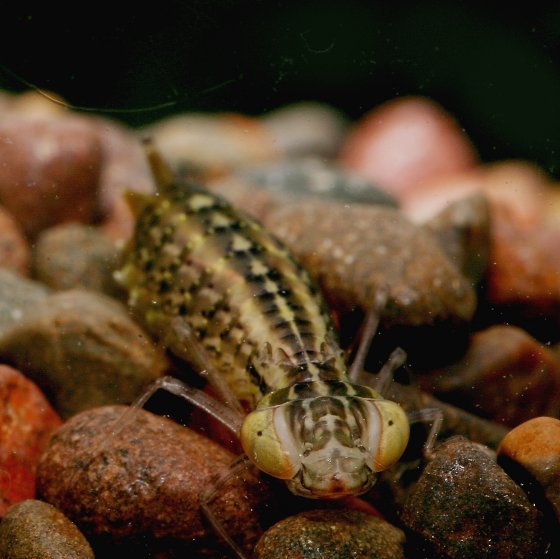 Do you have a guess? This is a green darner dragonfly (Anux junius) in its aquatic nymph form. Dragonflies and damselflies of Lake County spend the majority of their lives in this underwater stage of development (anywhere from one to four years depending on species). Although, we are much more familiar with their aerial adult forms, zipping and skimming over water and fields. While adult dragonflies enchant us with their glistening wings and jewel-toned bodies, the alien-looking nymphs have some odd behaviors that, while not necessarily enchanting, are certainly unusual and fascinating.

Green darner dragonfly nymphs hatch by the thousands from tiny spherical eggs roughly the size of sesame seeds. These eggs are laid by the adult female in shallow water on piles of pond debris, while the adult male acts as a security guard by clutching the back of her head with the end of his abdomen. Green darners are not too finicky about the kind of water in which they lay their eggs. Researchers have noticed that they will spread their eggs out over a network of permanent bodies of fresh water, rather than putting all of their eggs in one pond.

Once hatched, a green darner nymph spends its time voraciously eating any aquatic critter that crosses its path—from mosquito larvae to tadpoles, even small fish. Dragonfly nymphs wait in submerged vegetation and quickly reach out to ambush passing prey. The prey is captured by the nymph’s powerful extendable lower lip that is equipped with hooks and then reeled in towards the dragonfly’s mouth.

These aquatic carnivores receive oxygen through 60-80 gills that are located inside their abdomen, essentially breathing out of their rear ends. Additionally, they will expand and contract their abdomen, squeezing out water rapidly for short bursts of underwater “jet propulsion.” This technique helps the nymph quickly escape predators and enables it to survive in this watery world for multiple years. 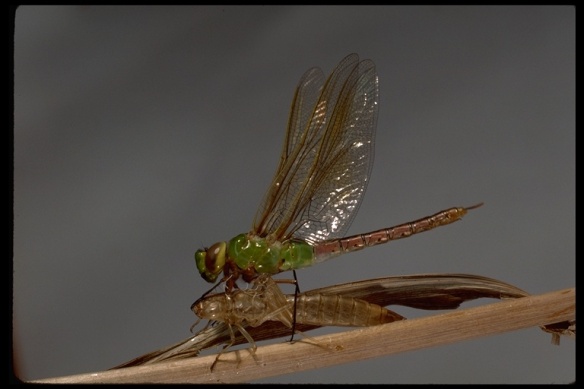 During its years spent as an aquatic nymph, this creature literally grows out of its skin. Its outer layer, or “exoskeleton,” is shed eight to 17 times, littering the ponds with cast-off skins called exuviae. Before its final molt, the green darner nymph crawls out of the water, finds a nearby sturdy surface such as a plant stem, and completes the final stage of metamorphosis by emerging as an aerial adult (video is a BBC documentary segment of the final molt for a different species).

The next time you see green darners circling a pond in their hunt for insects, or are lucky enough to glimpse a swarm of darners in migration along a waterway, take a moment to think about the years they spent underwater prior to becoming airborne. Explore how water can connect you to your forest preserves by joining us at the upcoming Dragonfly Discovery Program or one of the many other programs we are offering on this theme.