While we revel in the slow pace of these last dog days of summer, sipping one last lemonade on the porch or wandering down one last stretch of beach, there is another mammal pulsing with life that has no such concept of slowing down. One of the most abundant mammals in Illinois, the shrew lives its life entirely in the fast lane—tunneling about a foot below the ground’s surface.

There are three species of shrews that live in Lake County, Illinois. The most common species, and largest at about 4 inches long with a 1-inch tail, is the lead-colored short-tailed shrew (Blarina brevicauda). The short-tailed shrew lives in a variety of habitats from forests to grasslands and typically only lives 1-2 years.

The least shrew (Cryptotis parva), at about 3 inches long, can be distinguished by its cinnamon-colored fur and extremely short tail. Least shrews are most commonly found in open grassy areas. About the same size as the least shrew, the masked shrew (Sorex cinereus), appears grayish-brown with a longer tail and prefers low wet areas such as floodplains. 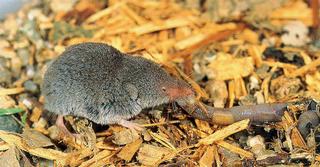 , shrews are actually members of an insect-eating order of mammals, commonly called insectivores. Shrews can consume their own weight in prey every three hours! Using a combination of heightened senses and echolocation to find prey and navigate their underground tunnel systems, shrews plow through a smorgasbord of insect larva, slugs, snails and earthworms. Shrews subdue their prey with a small punch of poison stored in salivary glands at the base of their large front teeth. This poison is strong enough to take down prey as large as a mouse. By eating so much food, shrews help control insect and rodent populations. In winter months, shrews add berries, seeds and nuts to the feast.

Their speedy existence doesn’t end there. Active both day and night, this velvety fur ball can burrow at a rate of 12 inches/minute in loose soil, its heart beating a staggering 1,000 times in that same minute. With tiny eyes and poor vision, shrews rely on echolocation, a series of high-frequency squeaks, chatters and clicks to orient themselves through dark tunnels. These complicated labyrinths benefit the land by aerating and mixing the soil. 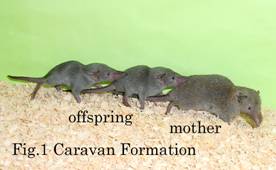 This need for speed spills into their social life as well—shrews can mate up to 20 times in a single day. After about 20 days, three to eight babies (the size of honey bees) are born. When danger lurks, shrew moms keep their babies safe by creating a “shrew-train” where each baby takes the tail of a litter mate in its mouth, the first in line taking the tail of the mother. The female is then able to drag the caravan swiftly and safely away from predators such as snakes, raptors, coyotes and skunks. Often these same predators will kill a shrew but will leave it in the middle of a trail and not consume it, which is where shrews are commonly found when exploring the preserves. Scientists believe that the disagreeable, musky odor a shrew emits when in danger may deter predators from finishing their meal.

Even though shrews are abundant in Lake County, they are rarely seen by people except when skittering across a trail or left on the trail by a predator turned away by the stench. Look for these manic mammals in action (or recently out of action) when exploring your favorite forest preserves.

Speaking of exploration, the Lake County Forest Preserves’ Hike Lake County program has begun. Hike Lake County is an annual program, highlighting 12 designated trails in a variety of habitats and preserves. Complete seven of the 12 trails and earn a commemorative medallion or dog tag for a furry friend. New this year— download the Forest Preserves’ smartphone app and use it to scan QR codes on sign posts hidden along the Hike Lake County trails to unlock secret content. The app is available for free from the Apple App Store or Android Play Store. Happy trails!