The sun had set, the campfire was doused, and the food was stashed away for the night as my sons and I tucked ourselves into our sleeping bag cocoons, thoroughly exhausted in a way one can only be from a day spent entirely outdoors. Still, sleep would not come easily. The whirling drone of thousands of annual cicadas buzzed through the nylon walls of our tent loud enough to overpower our fatigue. I lay awake, thinking it odd the cicadas would be calling after dark, when I caught a hint of the rising full moon through the ceiling screen and realized they were staying up late to party with the extra light. One of my boys groaned, “Isn’t there anything that can stop these CICADAS?” As a matter of fact, the next day we found just the thing: a cicada killer wasp (Sphecius speciosus).

These “cicada hawks” are some of the largest wasps found in the eastern United States, including Lake County, Illinois and the Lake County Forest Preserves. Unlike social, hive-dwelling honeybees and bald-faced hornets, cicada killer wasps are solitary digger wasps. Their seasonal burrowing activity typically spikes during the first few weeks in August. During this time, female wasps are in hot pursuit of food for their young—those noisy annual cicadas, which are abundant during these dog days of summer.

The adult wasps don’t eat cicadas, but rather feed on flower nectar. Male wasps can be seen in groups, often locked together and tussling in midair mortal combat to stake out the best breeding spot. While this may look intimidating, these antics are literally all buzz and no sting; male cicada killer wasps have no stinger and die shortly after mating. Unlike social bees and wasps, female cicada killer wasps have no hive to guard, so they’re usually not aggressive. They hunt solo, singularly focused on nabbing cicadas in midair.

Once she’s caught a cicada, the female wasp will paralyze it with a venomous sting and lug it back to her burrow. This return flight can be difficult, as the cicada is often twice the weight of the wasp. Wasps are often seen dragging cicadas up tree trunks to get high enough for a descending flight to the burrow. 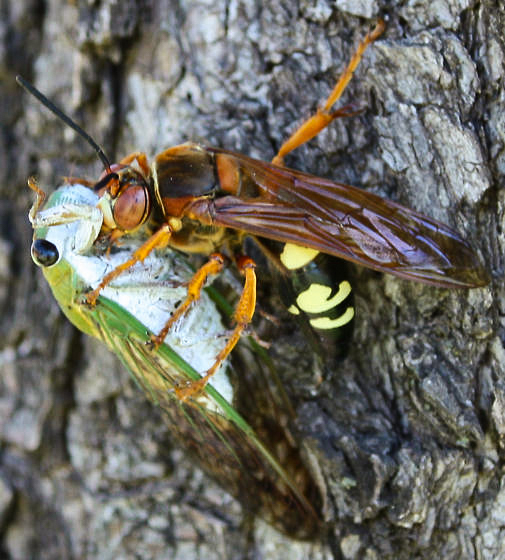 Burrows are found in sunny spots with well-drained, light-textured soils. They typically have a U-shaped mound of dirt surrounding a nickel-sized hole. What you don’t see is the long, underground tunnel up to four feet in length. Branching off the main tunnel are multiple oval chambers, created by the female wasp chewing soil with her jaws and kicking it out using special spines on her hind legs.

Up to 15 chambers dot each tunnel, where the wasp mom takes her cicada catch. After she squeezes her prize into the chamber, the female wasp lays an egg under the leg of the paralyzed cicada. Eggs destined to become female wasps get two to three cicadas to eat, while male eggs only get one. Once the egg hatches after about two days, the larva feasts on the cicada buffet until it’s had its fill, then promptly spins a silken case. The larva will stay nestled underground in its cocoon through the autumnal changing of the leaves and the winter sprinkling of snow, emerging as an adult wasp in the spring.