Just like fish stories, it seems everyone has a skunk story to tell. I have many, but my favorite one happened a few years ago in the spring, when I was getting ready to teach education programs at Greenbelt Forest Preserve. Before the students from a local school arrived, we were busy unloading supplies and setting them out around the preserve. When we returned to the van, we found a skunk sauntering right up the open lift-gate, looking curiously like he might climb in! We froze, chanting in a hushed tone to ourselves, “Please don’t go in there, please don’t go in there.” Either our chants worked, or he realized the preserved insects in the cases he was checking out were not a good meal. He casually wandered back to the brushy field and was long gone by the time the bus arrived. 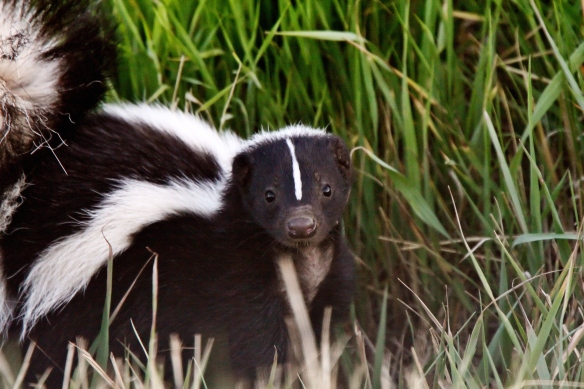 Not surprisingly, the Latin name of striped skunks (Mephitis mephitis) means ” bad odor.” Until recently, members of this family, including 10 New World skunks and 2 Asian stink badgers, were included in the same mammal family as weasels. This group is now considered part of a separate family entirely, Mephitidae, which is characterized by black and white fur (warning coloration) and special glands that produce a foul musk.

Striped skunks are the only species of skunk in Illinois and are found commonly throughout Lake County, Illinois. They utilize a wide variety of habitats, always within reach of permanent water, from forest edges to grassy fields. Chiefly nocturnal, striped skunks locate mice, eggs, insects, and berries by their sense of smell and hearing, often digging and rooting around in soil for their favorite critters. While they are generally solitary animals, small groups have been known to den together in winter for warmth rather than companionship. While they do become dormant when temperatures dip below 15 degrees Fahrenheit, skunks are not hibernators, and are often active on warmer winter nights, becoming increasingly active during their breeding periods between February and March.

As breeding season begins, skunks emerge from dens, which are typically abandoned underground labyrinths from other animals such as woodchucks and fox. In a pinch, a skunk will dig its own very simple den. Regardless, skunks will almost always build a nest of leaves inside its burrow, in a very entertaining way, backing into the entrance hole with a giant mouthful of leaves as the caboose.

After mating, an adult female will continue to use dens, albeit different ones than in winter, to raise her 4-8 babies on her own, while the adult male returns to his solitary life. Young are typically born in May and will stay close to the mother, often following in a single file line, like fuzzy little ants marching, until late June or July.

Most skunk stories people tell me are different from mine, in that they almost always focus on what skunks are most known for: stinky spray. Skunks themselves are not foul-smelling animals, nor are their dens. The musk they create as a form of self-defense, is secreted by two internal glands at the base of the tail. Skunks have control over these scent glands and can form a stream or fine spray of the phosphorescent fluid that can glow at night and travel up to 20 feet. The scent glands contain only about 1/2 an ounce of the volatile, sulfuric fluid, which is used up in about 5 rounds of spraying. Since a skunk’s body can only produce about 1/2 an ounce of musk a week, it is truly a defense of last resort. 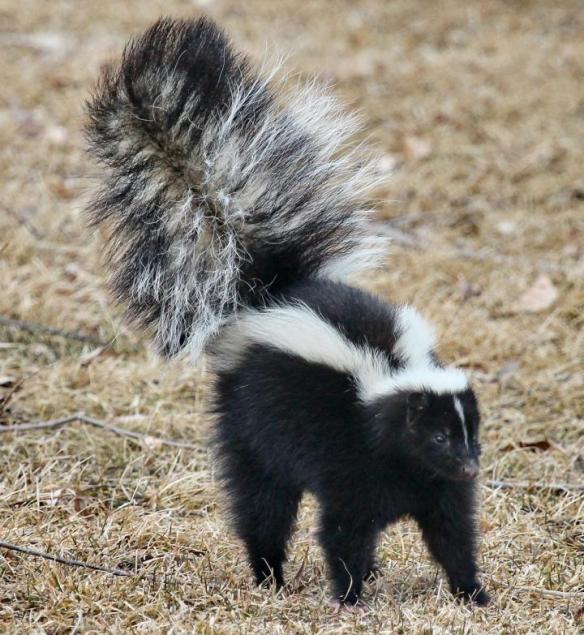 Skunks generally put up with a considerable amount of abuse before resorting to musking. When threatened, they will give several warning signs from stamping their front feet loudly, to clicking their teeth while hissing and growling. If that doesn’t do the trick, they have even been seen walking short distances on their front feet, their tails held high in the air, like some kind of a circus act. If all else fails, skunks will raise their tails, stand all their hair on end, twisting their bodies into a U-shape with both head and tail facing the threat, and let it fly. Sometimes, even after all of this, skunks can still fall victim to predators such as great horned owls and coyotes.

While it can be a positive and memorable experience to see skunks, from a distance, on a hike in our Lake Country Forest Preserves, sometimes they can be uninvited guests near our homes. By reducing elements, such as food, water, and shelter, that skunks require for survival, we can make areas around our homes less attractive real estate for wildlife. For more tips like this on living with wildlife, as well as a calendar of events that will get you out in the Lake County Forest Preserves this spring, visit us online and take a look at our newest edition of Horizons magazine.